Following the release of Farmhouse on Elektra in May, 2000, Phish spent the early part of June on a short tour of Japan, their second visit there in two years. Late June and early July were spent on a quick swing through the United States and their fall tour began in September. Phish began their fall touring in Albany, heading down the east coast and across the Midwest finishing up September with two epic concerts in Las Vegas. In November 2002, the second Vegas show (9/30/00) became the band’s first full-show live DVD release entitled https://www.phish.com/releases/detail.php?ID=15.

After Vegas, the band traveled through 105-degree heat to Phoenix, Arizona. In his end-of-tour journal at Phish.com, Mike called the October 1st show at Desert Sky Amphitheatre “the storm after the storm gig”. After the manic madness of Las Vegas, the band was loose and relaxed for the Phoenix show, where they joked and jammed at a high level. Throughout the show, Trey encouraged the audience to slap and/or make love to the person next to them, continuing his thoughts from the previous night in Vegas about the gooey mass of love-making people he dreamt about (see TMIPH September 2000). Along with Trey’s humor, set one of Phoenix featured inspired versions of Vultures, Llama and Runaway Jim. Set two heated up from the beginning with an exploratory Roses are Free, which segued into a sublime jam known as Guy Forget. The Guy Forget jam slid smoothly into When The Circus Comes To Town, which led to an inspired Camel Walk. The set ended with an exploratory David Bowie and Waste encore.

On October 3rd, Phish made their first appearance on The Tonight Show with Jay Leno. They performed Twist from the album https://www.phish.com/releases/detail.php?ID=22. On the 4th, they performed at Coors Amphitheatre in Chula Vista, California. They opened the first set at Chula with Moma Dance and closed the set with Run Like an Antelope, during which Trey substituted Fish’s tour nickname at the time, Bob Weaver, for the “Marco Esquandolis” lyric. Set two began with Rock and Roll followed by 2001. Bug, Harry Hood and a Loving Cup encore rounded out the set.

Phish played on the 5th at Verizon Wireless Amphitheater in Irvine, California. The first set there featured an excellent Wolfman’s Brother > Sneaking Sally Through the Alley, a rare Phish rendition of Come on Baby Let’s Go Downtown. Set two at Irvine featured David Bowie, Halley’s Comet > Walk Away, an ethereal Piper and set-closing Character Zero with Trey repeating the line (generally not part of that song) “fast enough for you”. The encore, While My Guitar Gently Weeps, rounded out the night’s music.

Phish played on October 6th and 7th at Shoreline Amphitheatre in Mountain View, California at which point they embarked on an indefinite hiatus. The energy of the last shows before the hiatus was palpable, as the band and fans pondered life without live Phish concerts for the foreseeable future. Emotions ran high and the music did not disappoint. The show on the 6th featured Stash > Boogie on Reggae Woman, Mellow Mood and Run Like an Antelope. The second set on the 6th featured a nicely transitioned Down With Disease > Spock’s Brain, setting the anything goes tone of these final shows. A stretched out Cities followed by Sand comprised one of the strongest musical highlights of the show as Trey experimented on his synthesizer, taking Sand way out. Grateful Dead rhythm guitarist Bob Weir joined the band for the encore on the 6th, singing and playing El Paso, hanging on for dear life on Chalk Dust Torture and closing the show with an inspired West L.A. Fadeway. As the band and Weir left the stage, anticipation had never been higher as folks wondered what the next night would bring. After the house music faded from the P.A. (the Rolling Stones’ Last Time), the house lights went down and the band opened the October 7th show with First Tube. The uncertainty of the band’s touring future weighed heavily. A series of classics beginning with Mike’s Groove came next, followed by Bathtub Gin, Glide and a spirited My Soul set closer. Set two began with Twist > 2001 > Tweezer, a combination that featured some deep improvisation which had become the band’s hallmark over the past decade. Meatstick with Japanese lyrics lightened the mood and segued into David Bowie and then Tweezer Reprise. The You Enjoy Myself encore was surreal, with as the bittersweet reality of the hiatus set in. After the last notes echoed through the venue and the house music (the Beatles “Let It Be”) kicked in, the crew appeared onstage to tear down. Instead of leaving, the audience broke into a long standing ovation for the band and crew, leaving everyone present to ponder the band’s first official hiatus from touring. 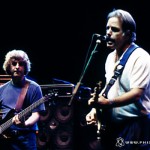