Having toured Japan and the U.S. that summer in support of their May, 2000 release, Phish taped an hour-long performance for Public Television’s Austin City Limits immediately following the summer before taking a couple months off. The Austin City Limits performance would be the series premiere for the show’s fall season.

The band kicked off their fall run of concerts with back-to-back shows at the Pepsi Arena in Albany, New York on September 8th and 9th. The first song of the tour was the band’s first rendition of Bob Marley’s Mellow Mood and the tone was set. The September 9th show featured a guest appearance by Tom Marshall for the "Marco Esquandolis" lines of Run Like an Antelope. The second set kicked off with a smoking combination of Jibboo > Curtain > Sand. During the end of Sand, Michael Ray joined the band with trumpet in hand and sat in for the balance of the second set. Another pair of shows followed on September 11th and 12th at the newly-renamed Tweeter Center (formerly Great Woods) in Mansfield, Massachusetts. The band closed the September 12th first set with First Tube, followed by Divided Sky and an explosive Wilson. They closed the second set on the 12th with 2001 > Mike’s Groove and a Squirming Coil encore.

After a couple days off, the tour resumed at Darien Lake in Darien Center, New York. It rained all day and was pouring by showtime. Carini was the fourth song of the first set and proceeded to evolve into a heavy metal meltdown, setting the stage for a huge jam that developed out of the set-closer, Suzy. The band opened the second set at Darien appropriately with Drowned, which also stretched into a twenty-five minute extended jam. A band favorite, the show has become Volume 3 of the band’s first series of live releases known as Live Phish 03. The next night found Phish in Pennsylvania at Hershey Park Stadium. The soundcheck that night, Chocolate Phish, was used as the sound bed for the new phish.com home page. The band opened the second set of September 15th with Piper into Lizards, followed by Tube.

Another day off followed before Phish played at Merriweather Post Pavilion on September 17th. The Merriweather show proceeded fluidly, with Bathtub Gin punctuating the first set, before it concluded with the powerhouse combination of Fluffhead, Curtain With (which the band dusted off in July after a ten-year retirement) and Chalk Dust Torture. The band hardly paused during the second set, which flowed smoothly with Rock and Roll > Theme From the Bottom > Dog Log > Mango Song > Free. Phish performed the next night at Blossom Music Center in Cuyahoga Falls, Ohio. The second set of the September 18th Ohio show featured a jam out of the Boogie On Reggae Woman opener that led into Twist, followed by McGrupp and an exploratory rendition of Halley’s Comet.

After a stop September 20th at Riverbend Music Center in Cincinatti, the band and crew settled in for two nights at The Horizon in Rosemont, Illinois on September 22nd and 23rd. The band opened the first Rosemont show with Down With Disease and also featured Wilson segued into Slave to the Traffic Light and Bathtub Gin. They opened the second set of the 22nd with Tube followed by Reba and Ghost > The Wedge. The first set the second night of Rosemont kicked off with Phish’s first C’mon Baby Let’s Go Downtown, featured Frankenstein and Halley¼s > Fee, and closed with Stash.

Another long drive led up to the September 24th show at Target Center in Minneapolis, Minnesota. The second set there opened with a groundbreaking Cities that stretched into an ambient jam before segueing into Free. Ya Mar and Carini followed. The set ended with Cool It Down > David Bowie and a Fire encore. Phish performed the next night at Sandstone Amphitheatre in Bonner Springs, Kansas where they opened the show with The Beatles’ Everybody’s Got Something to Hide Except for Me and My Monkey and on September 27th, performed at Fiddlers Green in Englewood, Colorado. The second set on the 27th featured Piper, Gumbo and Ghost, closing with Brother and YEM. An encore of Loving Cup topped off an excellent set in Colorado. The band traveled through the night to Las Vegas, throwing a party on the 28th at their hotel, where they performed a few songs in various configurations with friends in attendance and prepared for concerts the next two nights at Thomas and Mack Arena.

September 29th was the first of two Vegas dates, both of which received much attention from fans keeping close track of the band’s final run of shows before taking time off. The first set of the 29th featured the unique grouping of Wilson > Spock’s Brain > Bathtub Gin. The probing interpretation of Bathtub Gin made it clear the stay in Sin City would be rewarding for winners and losers alike. The second set of the 29th began with the first Dinner and a Movie since the March 1, 1997 Hamburg concert (see TMIPH March 1997). Kid Rock joined the band on vocals for a number of songs including Rapper’s Delight and You Shook Me All Night Long. Kid Rock stuck around for the encore, We’re an American Band, during which he improvised lyrics about the party the night before. After the concert, Trey joined Oysterhead bandmates Les Claypool and Stewart Copeland at The House of Blues for a mini-set of their songs during Les’s Flying Frog Brigade’s encore there.

The band kicked off the second night in Las Vegas with the first Walfredo in over two years followed by The Curtain With. Set two of the 30th featured Timber and the first Colonel Forbin’s Ascent > Fly Famous Mockingbird in over two years, during which Trey related a dream he had about the value of the Phish experience and his relationship with the audience. He concluded the Forbin’s narration by thanking the audience from the bottom of his heart, explaining the band would be taking a break, and sharing his hope that they would return after the hiatus for seventeen more years. The second set of the 30th concluded with Twist > Sand > A Day in the Life. The Emotional Rescue encore concluded with Trey and Mike having an onstage guitar duel before they left the stage.

After departing Vegas, the band moved on to play the final five concerts of the fall tour before beginning their extended break and diving into a variety of solo projects. 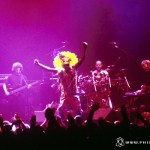